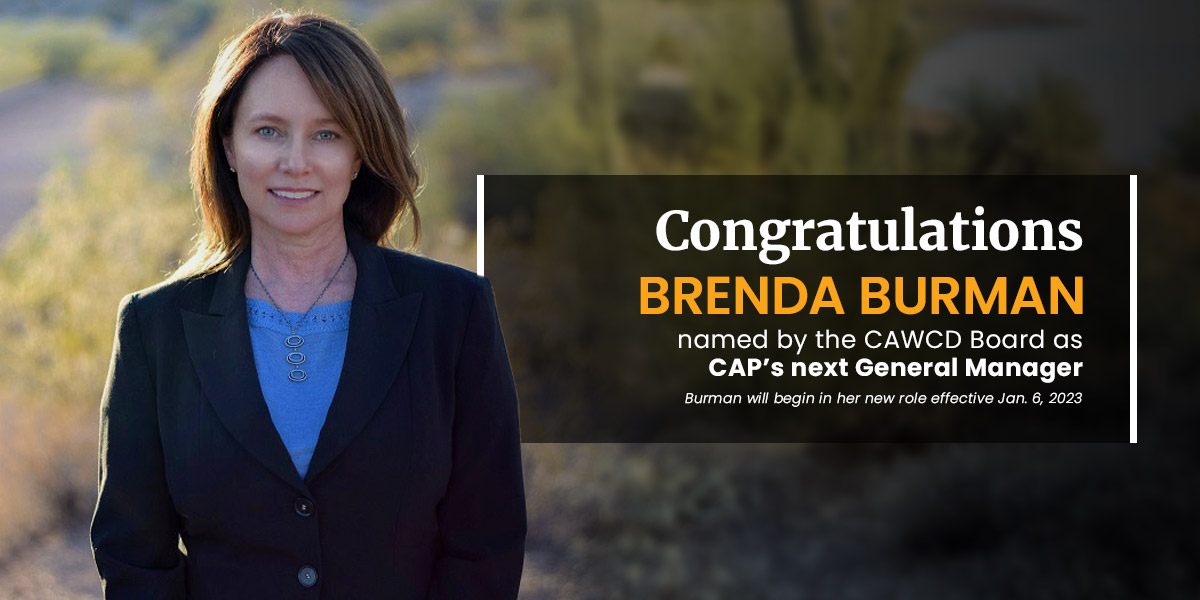 Burman joined CAP in 2021, advising on issues as the organization prepared for its first Tier 1 Colorado River shortage. In that regard, she drew upon her experience as commissioner of the Bureau of Reclamation from 2017 to early 2021. There, she dealt with the long-term drought on the Colorado River and in other Western river basins, as well as aging infrastructure, decreased supplies due to climate change and increasing environmental concerns.

“Arizona is facing huge challenges on the Colorado River and now more than ever CAP needs a leader who can step into the ongoing negotiations and advance our perspectives,” says Terry Goddard, CAWCD President. “Brenda Burman is uniquely qualified for this position, bringing with her decades of experience with Arizona and water issues nationwide. We are pleased to hire her as CAP’s first female general manager.”

Burman has spent more than 25 years working with diverse partners to find durable, innovative solutions for water, energy and environmental challenges. She has worked across the water community in private legal practice, as the water and energy counsel for U.S. Senator Jon Kyl, as senior water policy advisor for The Nature Conservancy, and in senior positions for water districts, including the Metropolitan Water District of Southern California and Salt River Project.

Burman holds a bachelor of arts degree from Kenyon College in Ohio. After college, she worked as a park ranger at the Grand Canyon before earning her juris doctor degree from the University of Arizona College of Law.

“I am humbled and honored to be selected as Central Arizona Project’s next general manager,” says Brenda Burman. “During the past year I have worked alongside my CAP colleagues and with those throughout the Colorado River basin, and what needs to be done is clear to me; protect the water supply that nearly 6 million people in Arizona depend on. There is a lot to do and no time to waste.  I will be focused on navigating the path for CAP through the next few years, which I believe will set the course for the next few decades.”

Burman will replace outgoing General Manager Ted Cooke, who will be retiring on January 5, 2023. Cooke will remain as general manager until that time.

“Brenda Burman has been selected as the fifth general manager of CAP,” says CAP General Manager Ted Cooke. “Her vast experience, coupled with her fresh perspectives, will help her take the reins and lead the organization through what will undoubtedly be some tough times. I am especially pleased to have worked with her this year so I know the transition will be as seamless as possible.”

Burman will take over leadership of CAP as its general manager on January 6, 2023.

PrevPreviousAn animated look at the 2022 Water Year
NextNov. 3, 2022: CAWCD Board approves power purchase agreement and revised CAGRD policies related to fees and conservation – as well as naming next General ManagerNext